Spurred by negative impacts of chemical pesticides and other toxic inputs in our food and farming, and advocating a shift towards ecological farming, a nation-wide mobilization campaign called INDIA FOR SAFE FOOD was launched, steered by ASHA (Alliance for Sustainable & Holistic Agriculture). This campaign is meant to create awareness amongst citizens about the ill-effects of pesticides to begin with, in the wake of numerous reports on India’s contaminated food and natural resources. Incidentally, this was the theme picked up by the popular television show anchored by Aamir Khan, Satyamev Jayate and activists of India For Safe Food were part of the show. ASHA and Sahaja Samrudha announced a Safe Food Mela in Lal Bagh on June 30th and July 1st to kickstart the campaign in Karnataka.

Safe Food mela had more than 20 organic outlets in the city set up their stalls, in addition to a poster exhibition, petition drive, an orientation to urban/terrace/balcony gardening, film screening, quiz contest, organic seed display and sales, lectures etc. 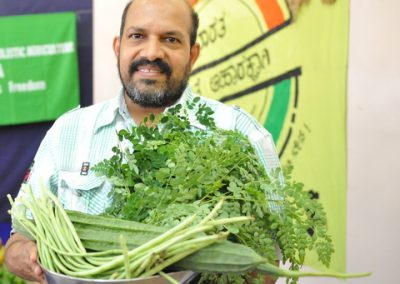